Not your average beauty blog.  A mother-daughter duo provides brains on beauty.

Developed with a focus on an educational and healthy approach to beauty, Mother Blogger and Jamie, The Working Girl, track and test beauty products without any ulterior motives and without regard to brand influences.

To learn more than you ever wanted to know about the beauty intelligentsia, click here.  Contact us at GWBBBlog at gmail dot com.

Girl-Woman-Beauty-Brains-Blog is only for informative purposes. It is not intended to be a substitute for professional medical advice. Please consult your doctor for your medical concerns. The authors are not liable for any outcome or damage resulting from information obtained from this site. 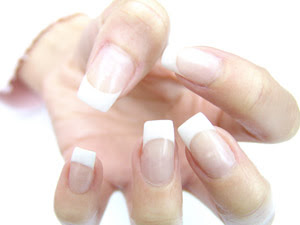 If the tiny heartbeat of pain in my fingertips would cease, I might be able to finish writing this article about how to rehab your nails after removing fake nails.

Having been a court reporter for many years, I kept my nails short and natural. Retired from the profession, I thought that gel nails might be a way to distract people from looking at the gaggle of age spots flocking on my hands.

Between the cost of salon visits and my impatience -- Fu Kiu threatened to throw me out of the salon last month because my impatience led me to play Beethoven's longest sonata, Op. 7 , on the massage chair's controls -- I ripped the fakes off my fingernails on Sunday night while watching three DVR'd episodes of Entourage. While Johnny Drama was crying over losing his girlfriend, I was crying over losing my nails. *

Like a gypsy with a ring on each finger, I attended book club last night with a flesh-colored Band-Aid adorning each fingertip. So much for distracting people from looking at my age spots.

There isn't a quick fix for life after fake nails either. It takes on average six months to grow a new nail.

Although nothing can change the growth rate of a nail, my next six months of nail rehab can be helped by using nail strengthening products.

How to use a nail strengthener:

With a coat of non-flashy flesh-colored nail polish, there is life after fake nails.

*What is the best method for removing fake nails?

If you had them applied at a nail salon, it would be best for you to have them removed there. However, if you want to remove them at home, you should soak your fingers in acetone or nail remover for some minutes. Then use a fingernail file to remove them carefully. After that, soak them in alcohol for 10 minutes and apply some beauty cream before you polish your natural nails.

Please excuse the construction on the blog.   We are undergoing yet another facelift.  If you have any questions, please email us at GWBBBlog at gmail dot com.