skip to main |3skip to sidebar 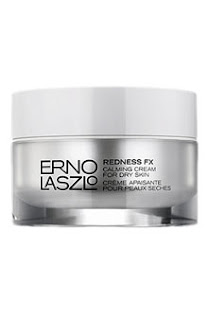 When visiting Seanmhathair -- which is Irish for Grandmother -- I was always intrigued by her peaches and cream complexion and her exquisite and expensive looking bottles of creams and lotions. When she was busy knitting or reading a book, I would tiptoe to her bathroom and gaze at her skincare collection in awe like they were a Rembrandt painting.

One of the skincare lines that graced her vanity table was Erno Laszlo. I hadn't given old Erno a thought until I received Redness FX a few weeks ago for testing and reviewing.

Who is Erno Laszlo?

Eighty years ago, Hungarian dermatologist Erno Laszlo was the first doctor to create his own line of medically based skincare products. His revolutionary idea of following a skincare routine based on one's skin type still proves effective today, and potent new formulas continue his tradition of cutting-edge skincare.

What is Redness FX Cream?

How Do You Use Redness FX Cream?

Apply as necessary after cleansing red, irritated skin. Follow up with a recommended moisturizer containing a broad-spectrum sunscreen with SPF 15 or higher for day.

How I Tested Redness FX Cream:

Erno, I am sorry I have ignored you for so long. Yes, you are a bit pricey, but you, my dearest Erno, soothed and calmed the persistent redness that for months I had been disguising with concealer.

Packed to the gills with anti-inflammatory ingredients, antioxidants, and moisturizers like olive oil and kukui nut oil, I would recommend this to any women who is suffering from rosacea or any redness from retinol products or other irritants.

For anyone that suffers from rosacea, here are good tips to follow:

Most Popular Articles on Girl-Woman-Beauty-Brains-Blog:

Beauty on a Budget: 3 Must-Haves

What Are Ivanka Trump's Beauty Essentials

How To Make Your Eyes Look Bigger In 4 Easy Steps

How To Spot Fake Tiffany

How To Spot Fake Chanel

How To Find A Hairstylist In A New City

Posted by A Girl-Woman at PERMALINK11:30 AM

Thanks so much for a very informative and helpful post!

All facets of beauty should be about smart and educated choices. Beckie and Jamie, a mother-daughter team, test and review beauty products, many times with diametrically opposing views; offer style tips; fitness advice; and keep you abreast of health and wellness trends.

This is brains on real beauty -- from the inside out. (Profile ad nauseam. Brains on Confidence. Contact us.)

Most Recent Posts on GWBBB

Chat with us on Sugar Loving and .

This work is licensed under a Creative Commons Attribution-Noncommercial-Share Alike 3.0 Unported License.